The Blind Leads the Blind

This page is predominately designed for Promoters, Booking Agents, Venues and other band looking to play shows together. This Page houses The Blind Leads the Blind's Videos, Photos, Interview, Shows and Biography below. I hope this page is helpful to you and if you have any questions do so on my contact page. Thank you very much and enjoy!

*Download EPK material at the bottom of the page 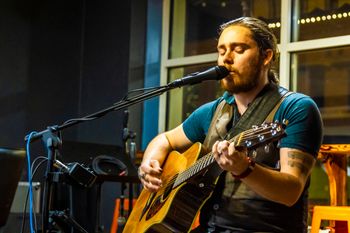 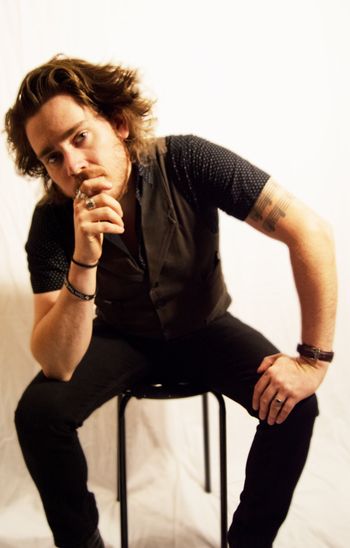 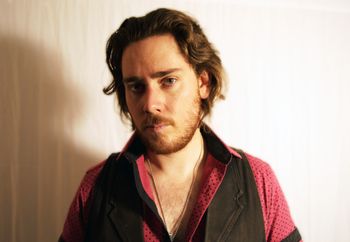 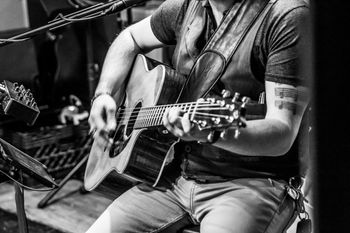 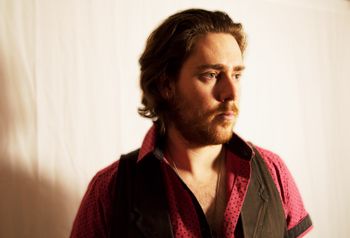 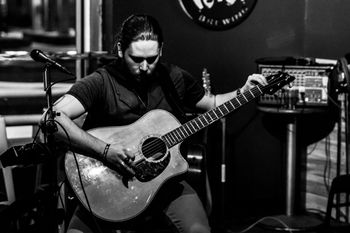 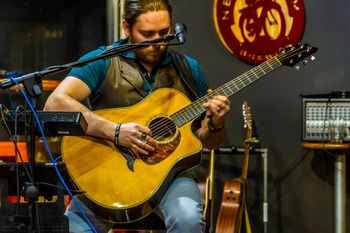 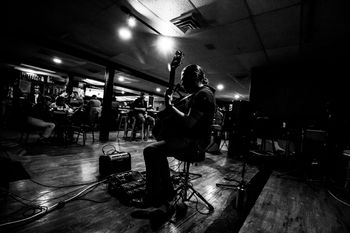 The Blind Leads the Blind has its humble beginnings in the heart of Los Angeles and has now settled in Loveland, CO. The founder and sole member of the band, Brian Hill, has dreams of opening people’s eyes to the appreciation for seemly mundane gifts such as sight, through music. In our current consumer culture, happiness seems to be only attained in the collection of possessions and riches, status and fame. We take for granted the beautiful gifts we experience everyday such as our 5 senses in which we use to experience. Remind the masses happiness is out there and it isn’t gained through meaningless clutter. Open your eyes to the Blind Leads the Blind to find yourself not distracted from reality but deeply immersed in it. The musical experienced not designed for escape but rather to engage.

The Blind Leads the Blind pulls its musical influence from many sources, some known some unknown, but others are evident to the everyday listener such as: Alice in Chains, Pink Floyd and the Doors but with some deep tribal roots incorporated. The Blind Leads the Blind doesn’t make music to cater to an audience but writes from the soul to portray emotion, music the composer himself would be interested in. We must make music to fulfill its purpose which is to pass an emotion over the air to be perceived by another and treasured in that moments as a musical memory association.

After a year and a half in the making, The Blind Leads the Blind has just released it’s debut album entitled, “One”, early summer 2017 which you can find on every major online store as well as his own website. Creative control is profoundly important to this project being one of the cornerstones to its existence. Music that will be delivered to you in its purest and most raw form, straight from the artist to your ears. This means, Brian Hill, Composed/Recorded/Produced/Mixed/Mastered everything all himself including every instrument you heard on his album entitled, “One”, with the except of the slide guitar on the track entitled, Infected.

Check it out and tell me what you think. We encourage you to join our mailing list to stay updated on what’s going on with the Blind Leads the Blind and hope to hear any criticisms, questions or comments.

The Blind Leads the Blind:    My hearing of you was purely happenstance through the grapevine monster that is Twitter. So I guess I could say, a little bird told me.

Exposed Vocals: So tell us your story. Where did you grow up? What made you decide to become an artist?

The Blind Leads the Blind:    The first time I had music affect me was with the listening of Master Of Puppets by Metallica when I was about 10 years old, in my driveway after school, in the beautiful city of Santa Monica, CA. I couldn’t believe music could be so fast, powerful and unbelievable to my 10 year old ears. I didn’t know the guitar could make those kinds of sounds or be played with such aggression. Little did I know I’d be able to emulate those sounds later in life. I started playing guitar because I needed to release my own aggression in a positive way. Music became my outlet for anything I was feeling and it still is today. I knew I wanted to be a musician once I had found my own voice through music. I’ve never looked back since then.

Exposed Vocals: How did you come up with that name? What was your inspiration behind it?

The Blind Leads the Blind:    I like the idea that everyone is Blind. That everyone is sort-of stumbling through life like a blind man. “The Blind Leads the Blind” is a phrase used in the Bible by Jesus himself. I think he was trying to say the world is blind and you’re liable to fall into a “ditch” if you decide to follow another blind man, since by definition, you are metaphorically blind, if you follow a blind man.

Exposed Vocals: What do you think about online music sharing? Do you ever give your music away for free? Why?

The Blind Leads the Blind:    The music business is evolving into something it has never been before. With the rise of file sharing record sales is obviously down tremendously. Before, the music stores and labels had the public “by the balls” with high priced CDs and other things. Now the ball is in the musician's court to bring value to their music, which is not going to happen if everyone gives their music away for free. Artist are placing their lust for fame above the value, quality and originality of music. So they give their music away in hopes to achieve said fame while effectively throwing every other artist under the bus because now the expectation of the listener has changed. The listener now expects free music. Artists need to value themselves and not whore themselves out for a little glimmer of chance to be recognized. Streaming services need to pay their artists more. The corporate machine won’t do that until artists start respecting themselves and start withholding their music till they are compensated fairly. Not any other occupational sect of the world is expected to do anything for free, except for the arts, and we have artists to blame for it. Streaming wages is currently a slave wage. Hopefully that changes in the future. To sum all this up, a man’s labors should never be free unless he wants to be a slave.

Exposed Vocals: Since everyone was a start-up once, can you give any smaller or local bands or artists looking to get gigs and airplay some tips?

The Blind Leads the Blind:    Play anywhere and everywhere. Have something that separates you as a artist. Be prepared when you play live: Email list sheet, merch., business card with contact, music to sell. Play well live.  Work hard.

Exposed Vocals: Do you ever make mistakes during performances? How do you handle that?

The Blind Leads the Blind:   Don’t ever stop playing. Play it off like you’re playing jazz.

Exposed Vocals: Do you tour? Anything interesting happen on tour that you think our readers would enjoy hearing about?

The Blind Leads the Blind:    I do mini tours. Once when I was doing a gig in Hisperia, CA back in 2015, after the show, I didn’t act like an arrogant prick and stare at my phone for the rest the night or leave right after the gig that would have made me a slot slut. I stayed after and watched the other bands and talked with fans. True story.

Exposed Vocals: Where do you usually gather songwriting inspiration? What is your usual songwriting process?

The Blind Leads the Blind:    Most of the time I have no clue where songwriting inspiration comes from as far as melodies go. Maybe rhythms from walking or skipping or cars. Damned if I know. Lyrics on the other hand come from a variety of places. Lately, I have been coming up with a metaphor to describe a person and running with that. So, essentially my songs become to be about people I know.

My song writing process begins with a guitar riff usually. Then an organization of guitar riffs that go with each other more or less. After that, I try to figure out smooth transitions between riffs to make it flow with a sensible structure in terms of verse, chorus and bridge. Then I write the lyrics on the topic and apply the lyrics. Then I record that and layer the rest of the instruments around my structure.

Exposed Vocals: Do you have a band website? What online platforms do you use to share your music?

The Blind Leads the Blind:    The website is really important I feel. It tells the listener that you are a serious musician and you can customize it however you like, another part of your creativity. I also use Soundcloud and Twitter with Facebook being my least favorite.

Exposed Vocals: What are some really embarrassing songs that we might find on your mp3 player?

The Blind Leads the Blind:    Some might consider classical embarrassing, and if they did, I’d be guilty. I am a big Chopin and Antonin Dvorak fan.

Exposed Vocals: If you were given half a million dollars and a year off, what would you do? How would you spend it?

The Blind Leads the Blind:    I’d hope I worked my ass off for that money because it would take the beauty out of it if someone just gave me a half million, but for the sake of hypotheticals, I’d invest in real estate for some income that gives back with little management and then once I was stable enough I’d upgrade my home studio and hermit in there until I felt I had something worthy of listening to.

Exposed Vocals: Any planned studio upgrades? What are you working with now?

The Blind Leads the Blind:    The list is literally endless. I’d start with UA 1176 and a Neumann u87. I’m currently running a UAD Apollo 8 duo into Logic X on the interface and DAW.

Exposed Vocals: How do you find ways to promote your music? What works best for you?

The Blind Leads the Blind:    I find the best ways to find out how to promote your music is to get a book on music marketing. Learn all the facets of licensing, internet marketing, royalties and live shows. I think the best way of marketing your music is through word of mouth, which comes through playing many shows.

Exposed Vocals: If you could perform anywhere and with any artists (Dead or Alive) where and who would it be with? Why?

The Blind Leads the Blind: I’d jam with Johann S. Bach at Red Rocks in Colorado, hands down. Just because J.S. Bach was and is the best musician to ever live and Red Rocks because I wouldn’t need to say anymore if you’ve been there. It’s indescribably beautiful.

Exposed Vocals: So, what’s next? Any new upcoming projects that you want to talk about?

The Blind Leads the Blind:     I’m just recording as many songs as I can. Trying to make every song interesting to the listener and myself. Nothing More.

Exposed Vocals: If you weren’t making music, what would you be doing?

The Blind Leads the Blind:    I really dig astronomy and the electric sciences. It’s my hobby. I’d probly be something in one those fields.

Exposed Vocals: Do you remember buying your first album? Who was it? What was going through your head?

The Blind Leads the Blind:    Most of the first albums I obtained I either pirated because napster was in full force then or I stole from the record store. First Album I actually bought was Far Beyond Driven by Pantera. The album opened my eyes as to what was possible on the guitar. R.I.P. Dimebag Darryl.

Exposed Vocals: How do you juggle the rest of your responsibilities while trying to stay ahead in your music life?

The Blind Leads the Blind:    Lots of stimulants. Haha, just kidding. No, I just push myself everyday to be better at what I do musically. It’s a mental game. The human brain is capable of doing incredible things when pushed to it’s limits. I also tell myself, “what one man can do so can another”.

Exposed Vocals: What should fans look forward to in 2016?